On 1 November 2004 Sir Hilbourne Frank was knighted for his dedication to serving the people of Barbuda as a founder member of the Barbuda Peoples Movement (BPM) for over 40 years. Hilbourne had retired as Barbuda’s representative in 2004 after entering politics in 1960.

Hilbourne graduated from Antigua Grammar School in 1950 and taught at the Grammar School, the Boys’ School and the Holy Trinity School in Barbuda from 1950 to 1960. He also worked at Coco Point Lodge and as a legal secretary for Claude Earle Francis until his departure for England in 1963. 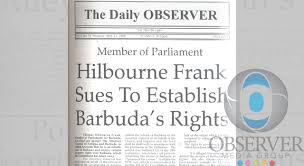 In the early 1960s Sir Hilbourne established the Barbuda Workers Union and whilst living in England founded the Barbuda Association. In 1974 he organised the first international convention of Barbudans. On returning to the island in 1979 Sir Hilbourne was elected to the Barbuda Council and became the Chairman, serving as Chairman of the Council on two occasions – from 1979 to 1985 and from 1989 to 1997. He attended the important Independence talks at Lancaster House with John Macdonald QC  and worked on the Essex Report.

More recently Sir Hilbourne has dedicated his life to the pursuit of equal rights and justice for Barbudan people and has personally pursued a number of legal cases to establish Barbudans’ rights to ownership of the island’s sand, and to their land rights and self determination through the Barbuda Land Act.

Sir Thomas Hilbourne Frank passed away peacefully at his home in March 2020. 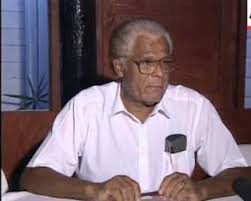