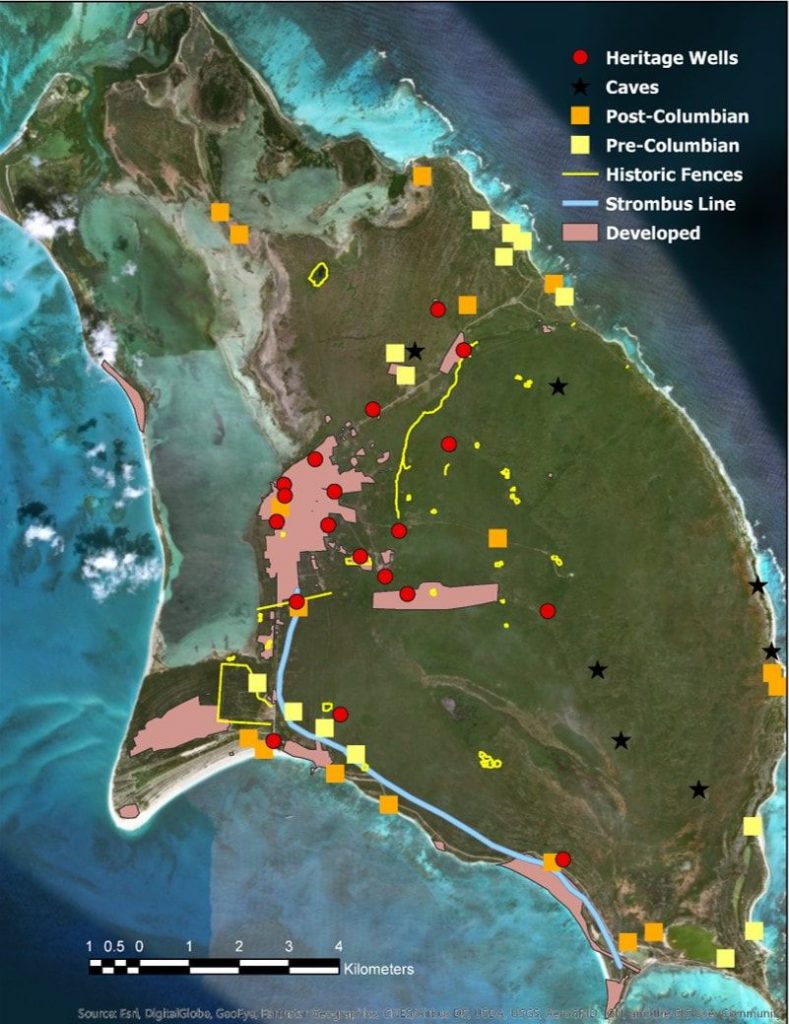 Everywhere you go in the village of Codrington you see everyday evidence of the history of Barbuda. There are important ancient hand-dug wells that are still in use today, houses built over many centuries from hand-cut stone, old village walls, roads with fascinating old names, pre-columbian sites yet to be explored, and all of this is part of the unique Barbuda story. Our local historians and conservationists have joined forces with visiting academics, in particular Sophia Perdikaris at the BRC (Barbuda Reseach Centre)  and her students, to research Barbuda history. Many of these articles can be found online and this Barbuda wells study describes the importance of well water to our population. 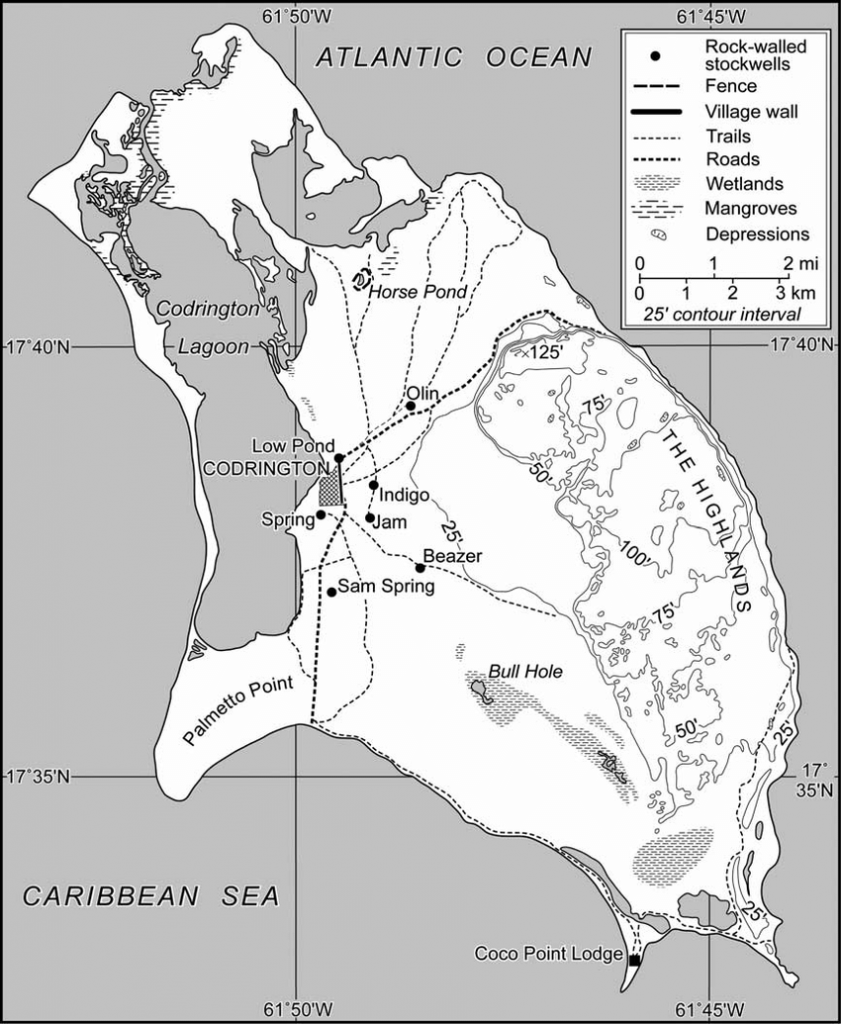 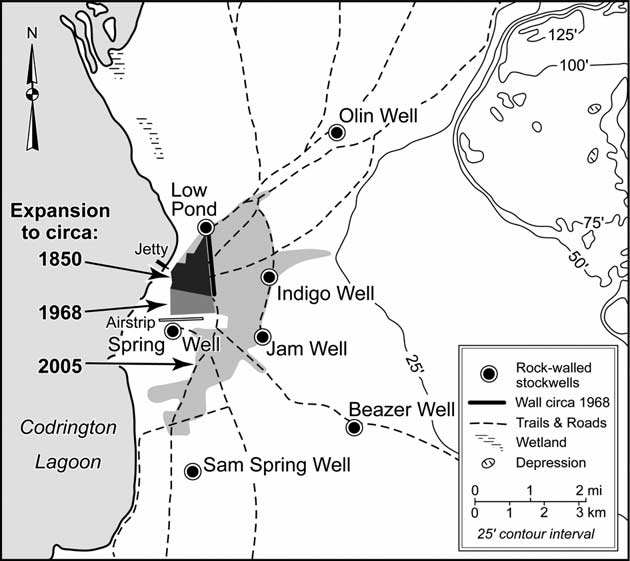 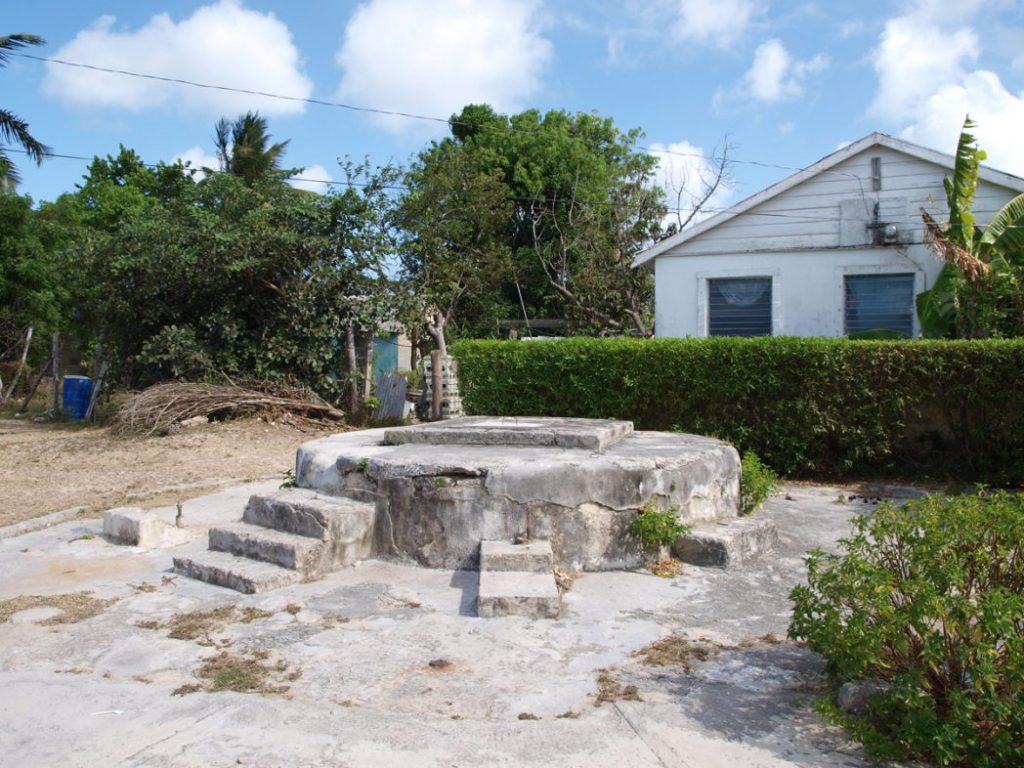 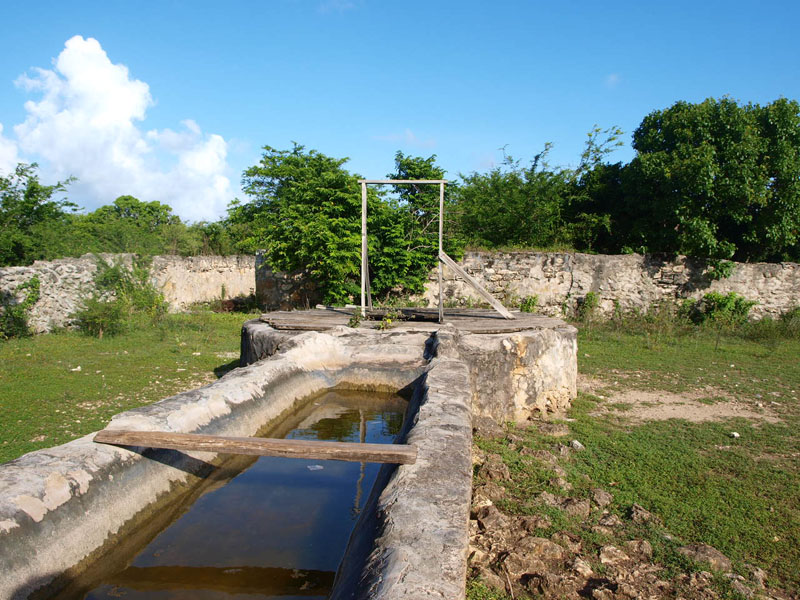 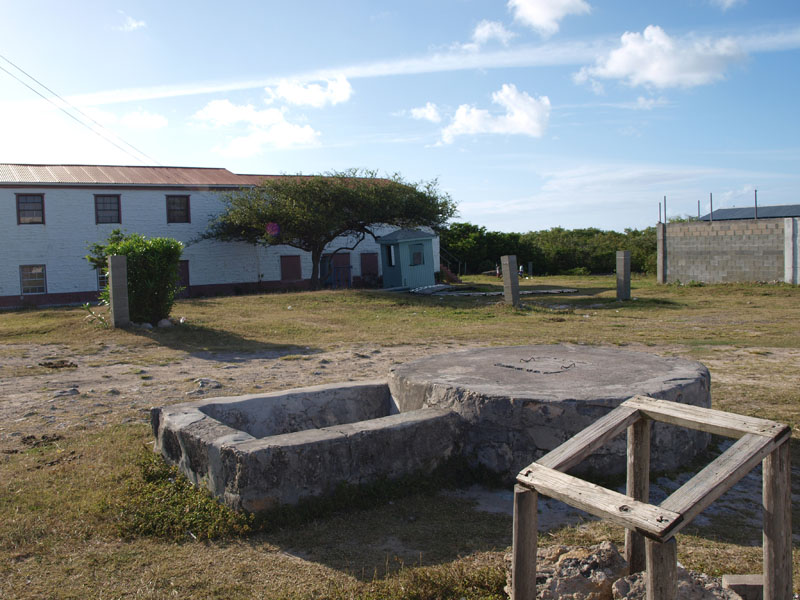 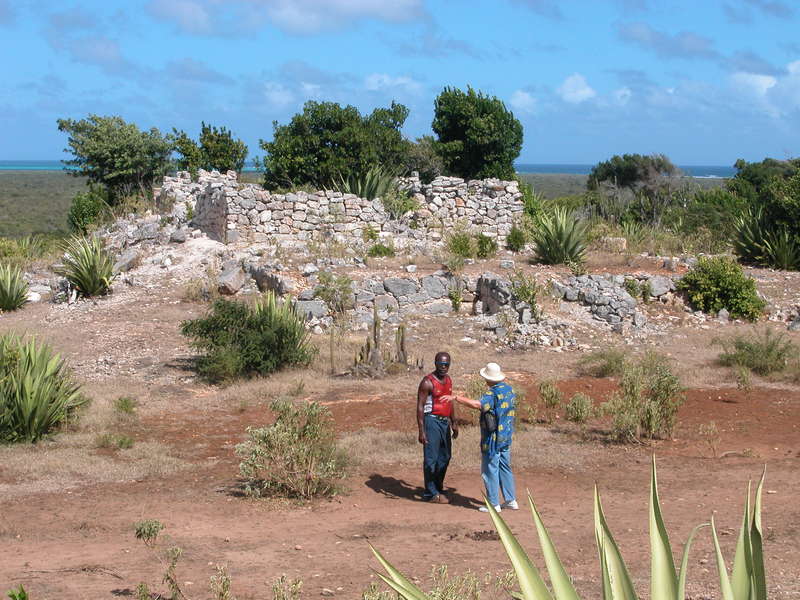 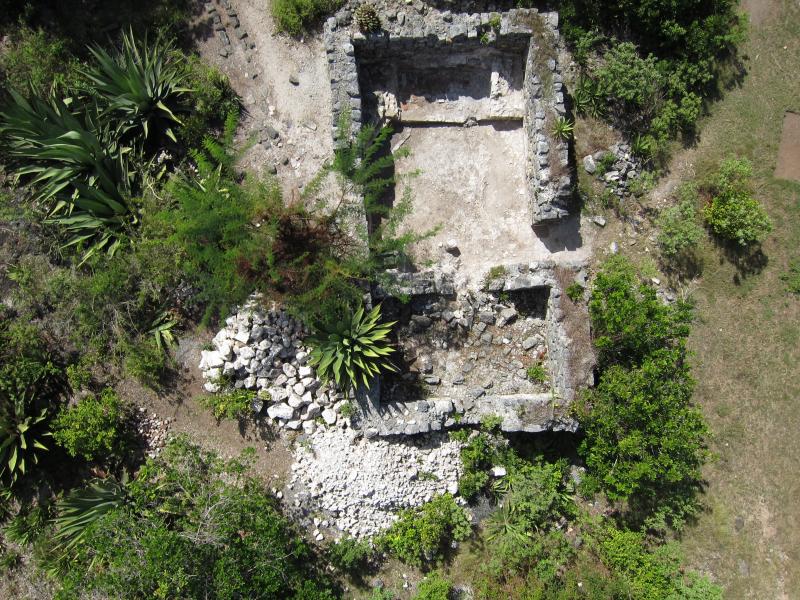 The ruins of Codrington House, known locally as “Willy Bob” or Highland House, are situated on the highest part of the island, about three miles north of Codrington Village. The view from the house is the best way to see most of the coastline of Barbuda. The floors and lower walls and a large cistern are all that remain of the family settlement of the slave owners, the Codrington family from Gloucester in the UK. Although the village is named after them there are no Codringtons currently living in Barbuda but you can find out more on the ‘historical notes’ pages about the colonial history of Barbuda. More recently Professor Sophia Perdikaris has worked in partnership with local people to map the area, to improve knowledge about this important historical site for visitors and local people alike.

The Castle was probably one of Barbuda’s most significant structures although only a well remains on the site today. This watercolour – reproduced in and taken from the research of David Watters from his 1997 publication ‘Historical Documentation and Archaeological Investigation of Codrington Castle, Barbuda ‘ – is the most extensive knowledge we have of its history. It shows the Castle on the left of the picture. Watters’ findings suggest that the Castle was first constructed in the 1680’s, was seized in a successful slave rebellion in 1745, and in 1783 had a ‘good view of activities in the village.’ It had walls of up to twenty feet high and three feet thick, with turrets and towers and was constructed of local limestone. It was said to be ‘a most impressive building’ in 1840 but in 1843 was nearly destroyed by a large earthquake. Although it was rebuilt it was finally left dilapidated until the 20th century when it was destroyed to use the stone to build the Ginnery – below. 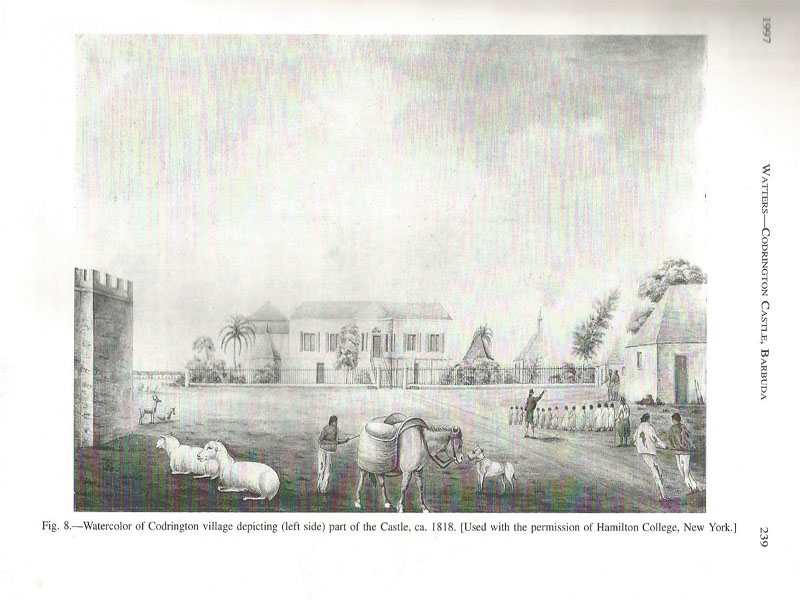 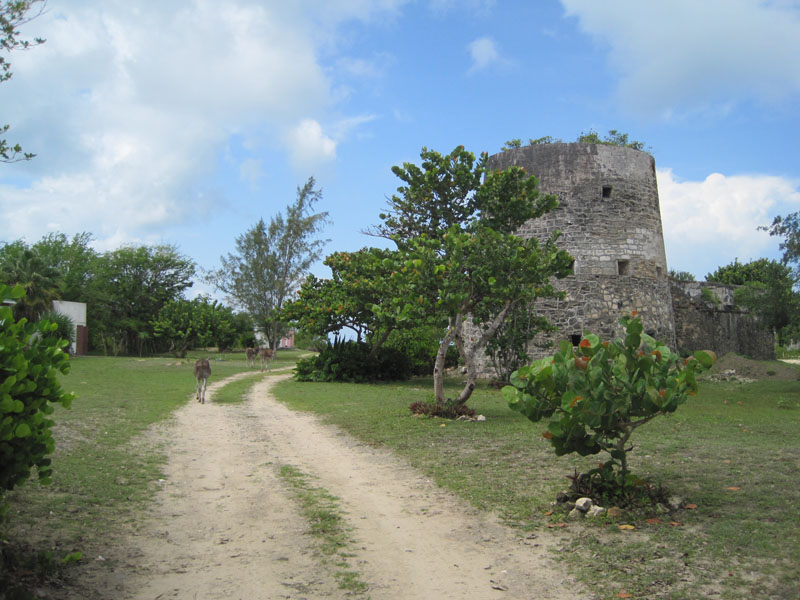 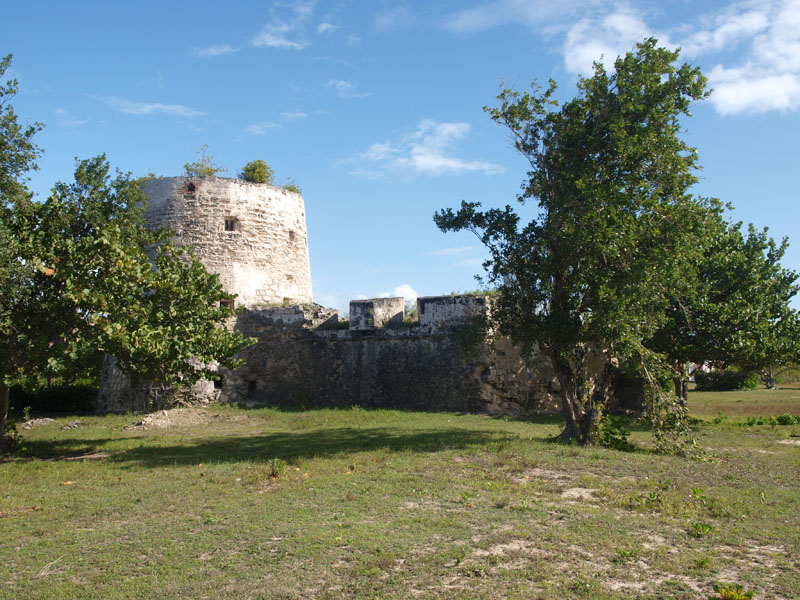 The Martello Tower (or River Fort) is near the beach at River, three miles south of the village. It is impossible to miss this site, all visitors pass by it at some time – on their way to Coco Point or the other beaches on this coastline. The tower has a raised gun platform and extremely thick walls, but is missing the floors and is now usually home to ferocious bees. It was built by the British to defend the island but there was a fort on the site before, probably built by the Spanish who fought the French, Dutch and English for control of these islands. 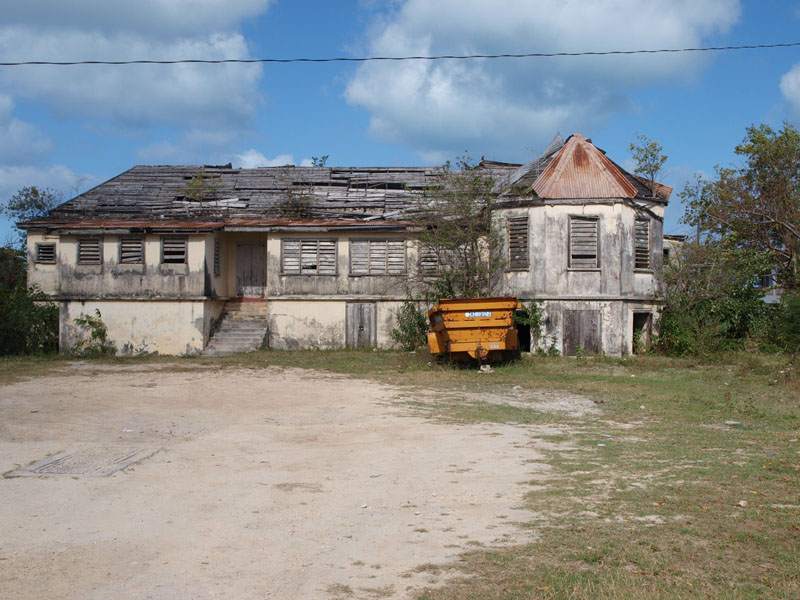 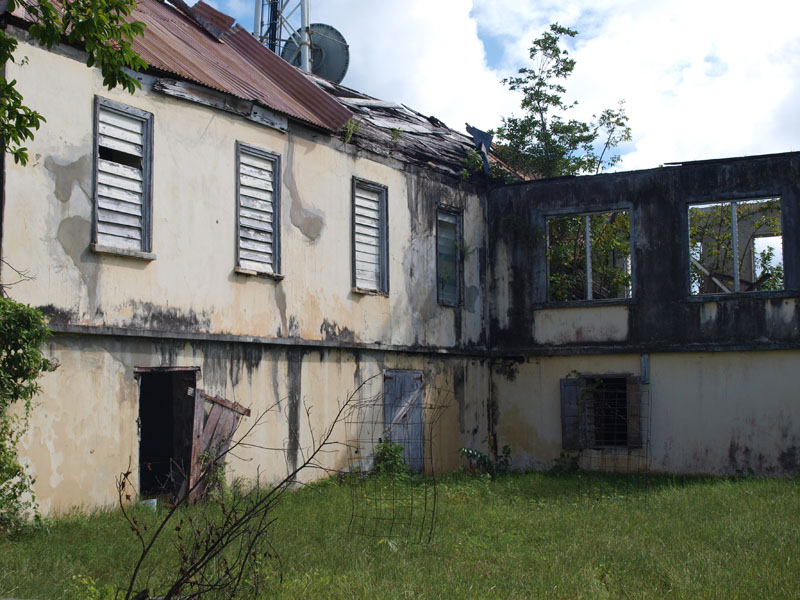 The Government House is located in the centre of Codrington village, behind the Post Office. The building dates from 1694 and still has a block by the gate for a rider to stand on to mount and dismount a horse. The building was lived in by the island ‘Wardens’ who were the representatives of the British Government from the time the Codringtons left Barbuda until as recently as 1976. The house has been severely damaged by various hurricanes and has yet to be repaired. 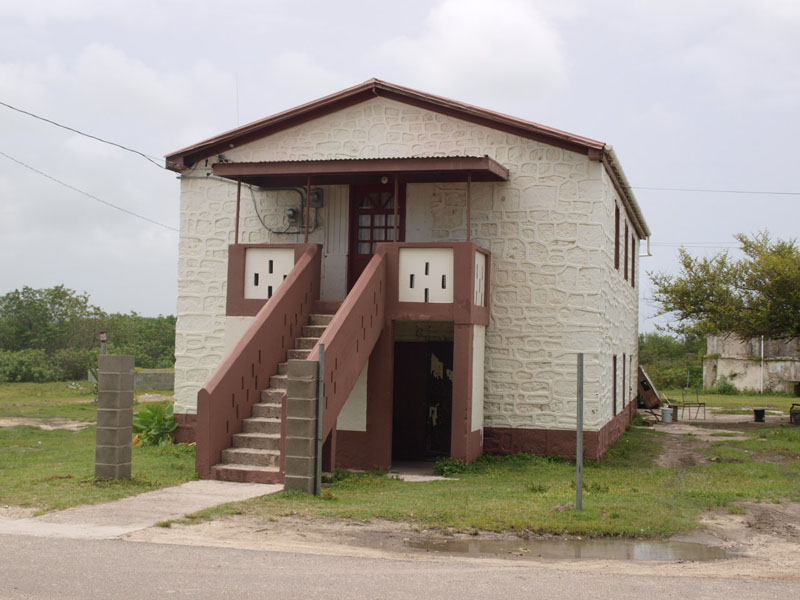 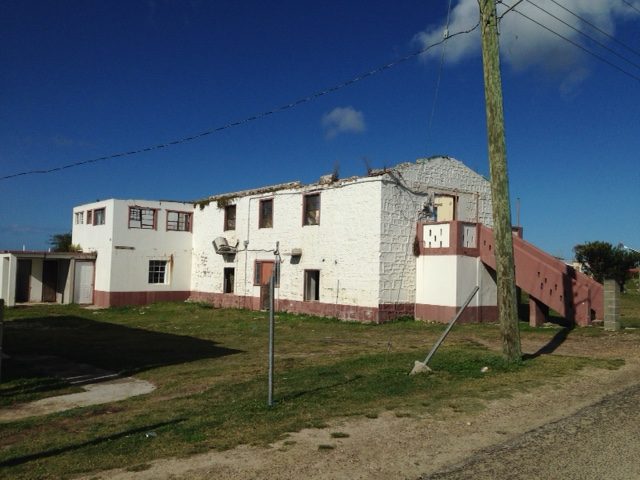 The Ginnery stored salt and cotton from the days of the slave trade to well into the 1900s. The salt can apparently still be tasted as it has so permeated the walls and you can see dates and quantities stencilled on the beams. Since then it has been used for a school classroom and for regular Council meetings. The roof was lost in Irma and the picture on the right shows it as it stands today.

The Barbuda way of life

‘What is certain is that life on Barbuda was different. It was not lived according to
the seasons of cane cultivation, and because of its isolation from other estates, its inhabitants developed a tight–knit community with its own culture, identity and annual rhythm separate and distinct from those of Antigua.

Slavery ended in Antigua and Barbuda in 1834. Because the entire island of Barbuda had been held under one land grant, the community continued the practice of autonomous cultivation on communal land in post-emancipation times. In agricultural societies with individual ownership of land, as the heirs increase over the generations, land gets subdivided until individual plots can no longer sustain the inhabitants. Instead, Barbuda practiced a communal ownership of land, where the land was never subdivided, but rather all Barbuda citizens shared equally in the ownership of land and had access to it for individual cultivation under the authority of local government (Berleant–Schiller, 1977, 1978; Tweedy,1981).

Up to recent times, this system protected the land from being sold to interests outside of Barbuda and preserved the island’s cultural heritage (Potter, 2011)’.

From ‘Disrupted Identities and Forced Nomads: A post–disaster legacy of neocolonialism in the island of Barbuda, Lesser Antilles’. by Sophia Perdikaris et al. 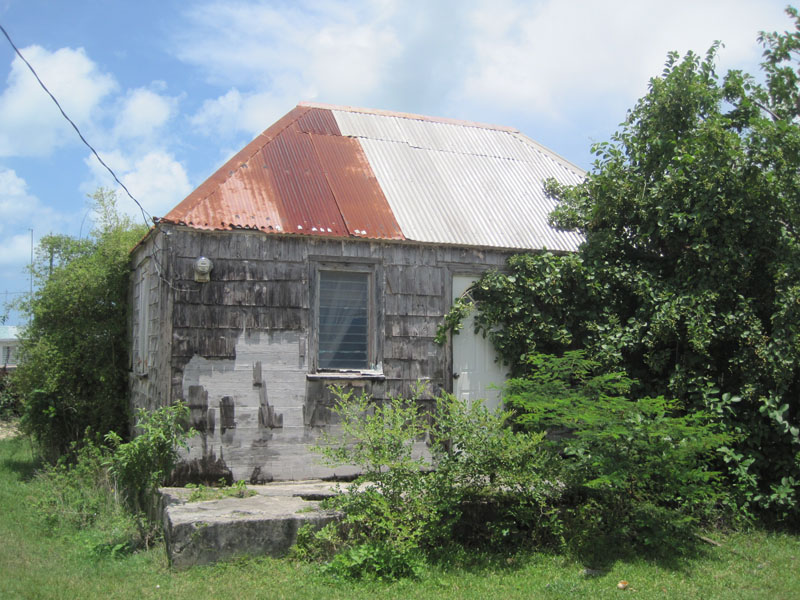 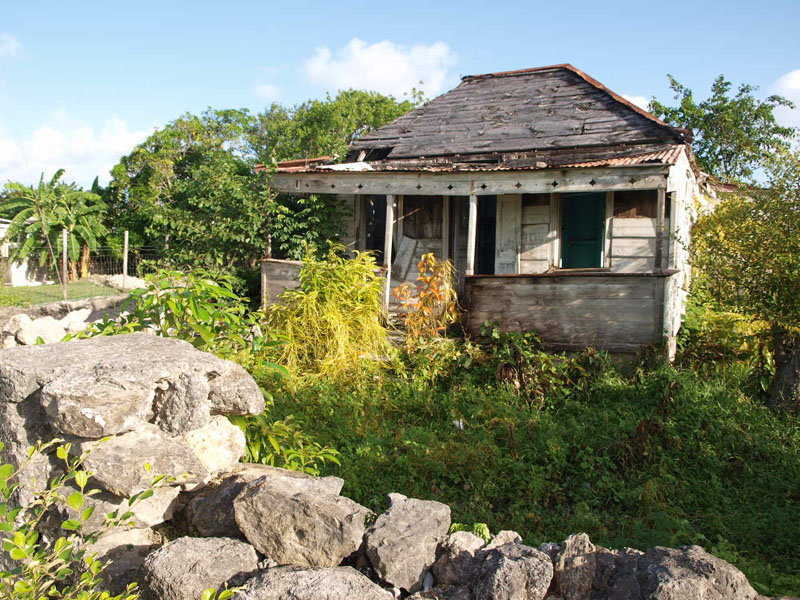 Some of these very old wooden houses no longer exist as they lose the fight against termites, or as people build new and better accommodation, but there are still examples of traditional styles of building and some pretty houses with great character to be seen in Codrington that are still in use today. Some of the stone from old houses and dry stone walls have been incorporated into newer buildings and at one time the whole village was walled to prevent animals from entering. 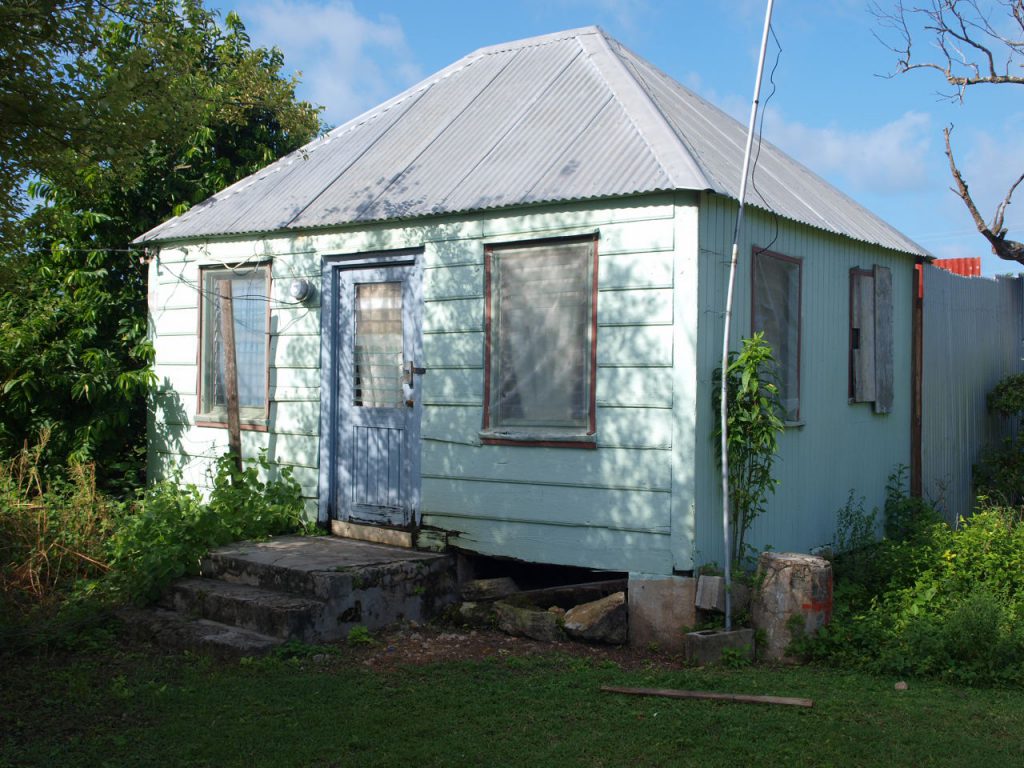 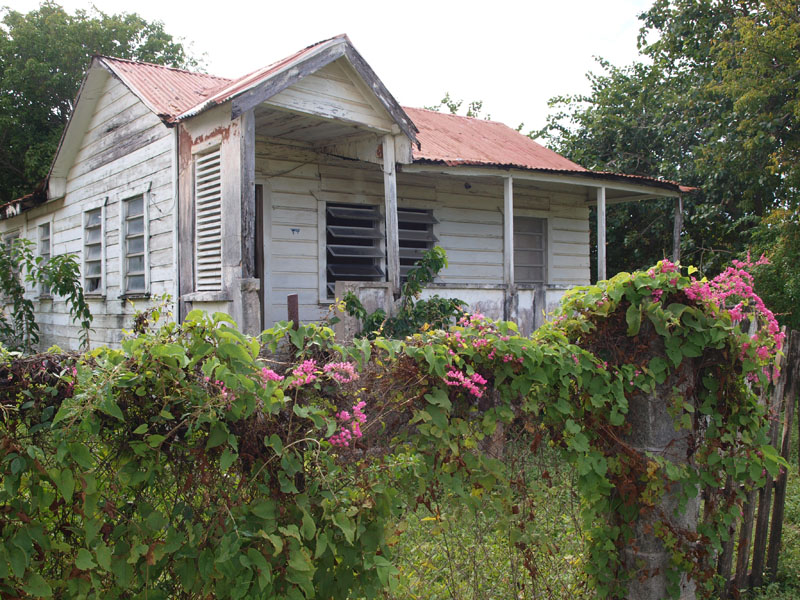 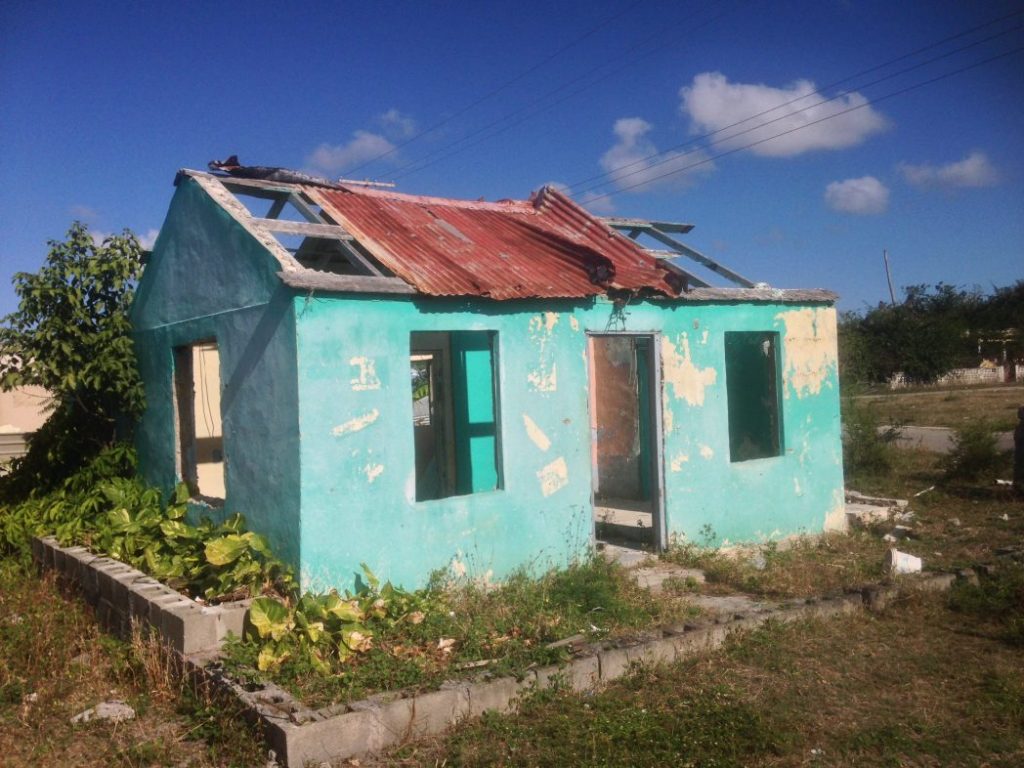 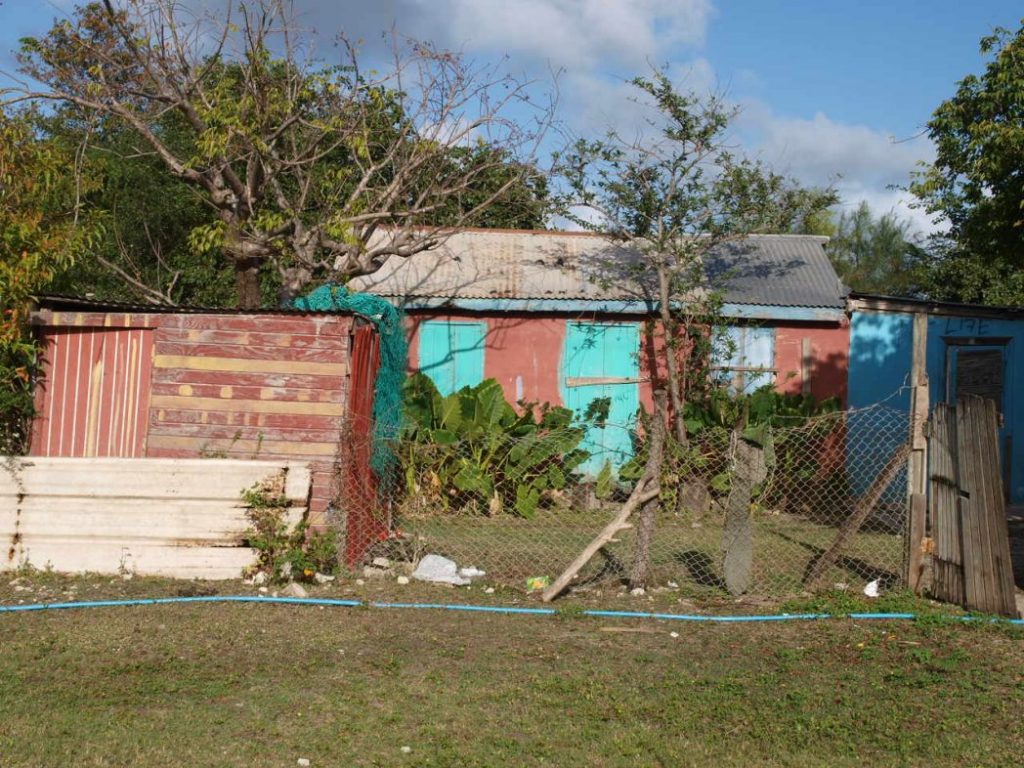 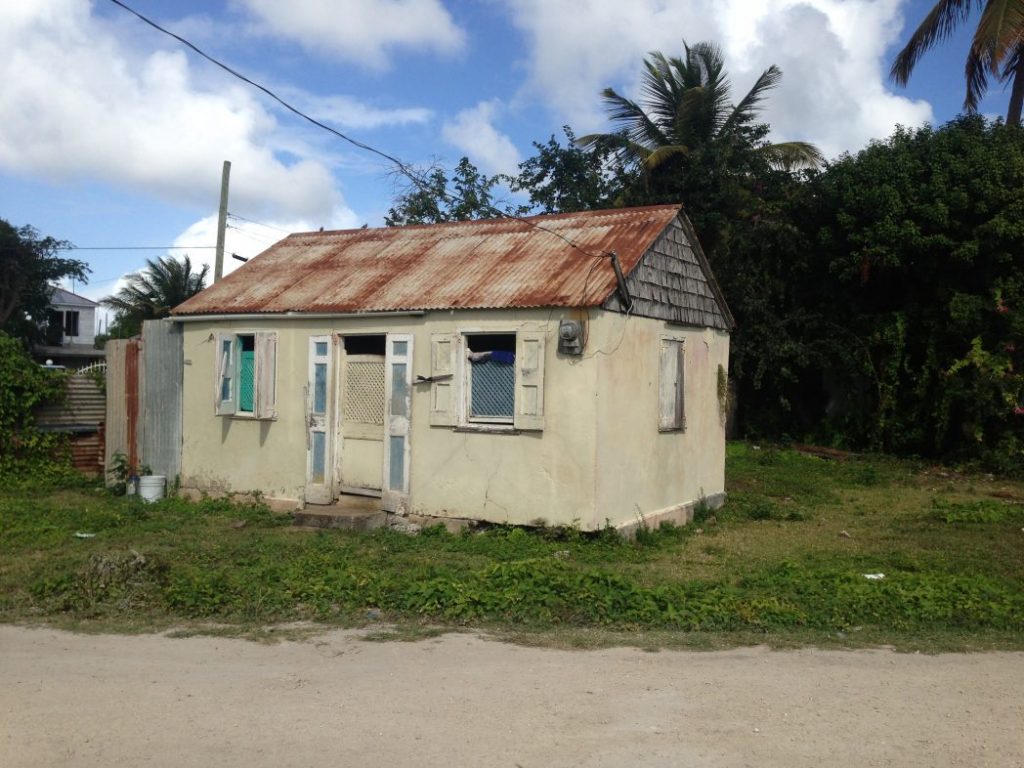 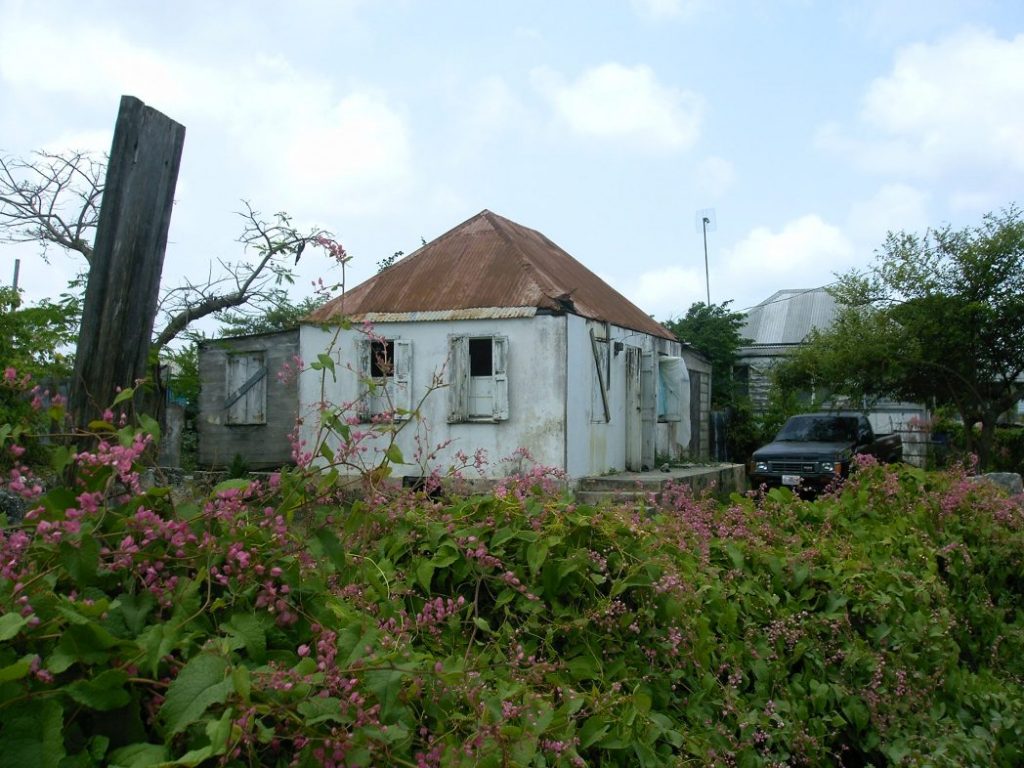 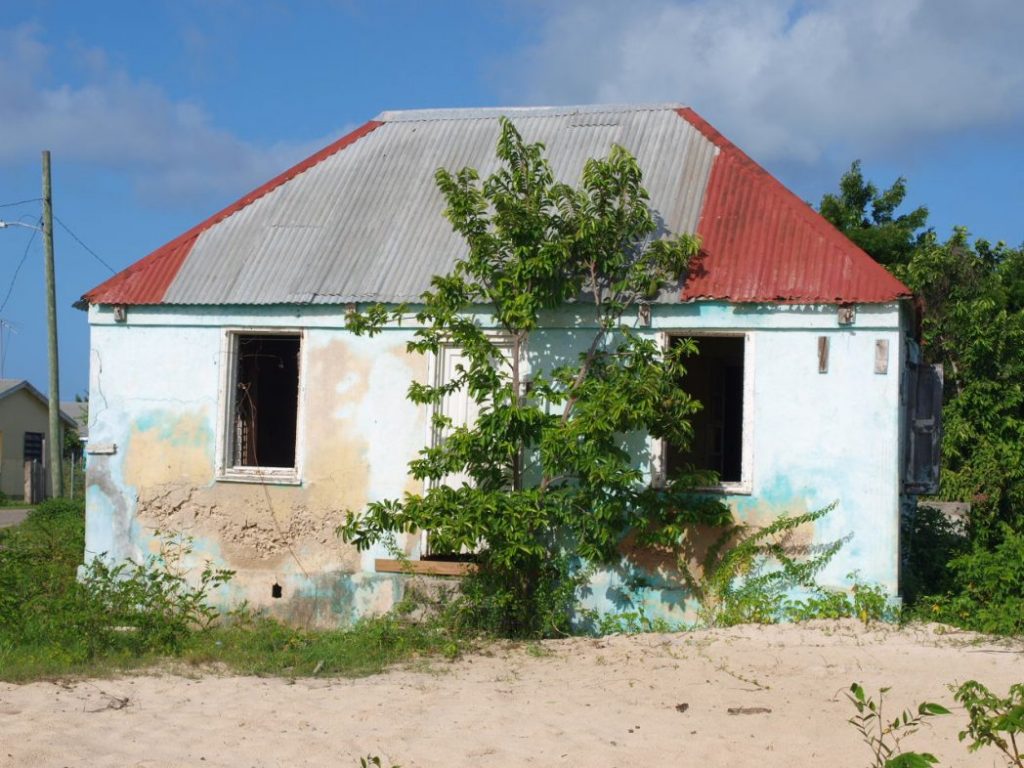 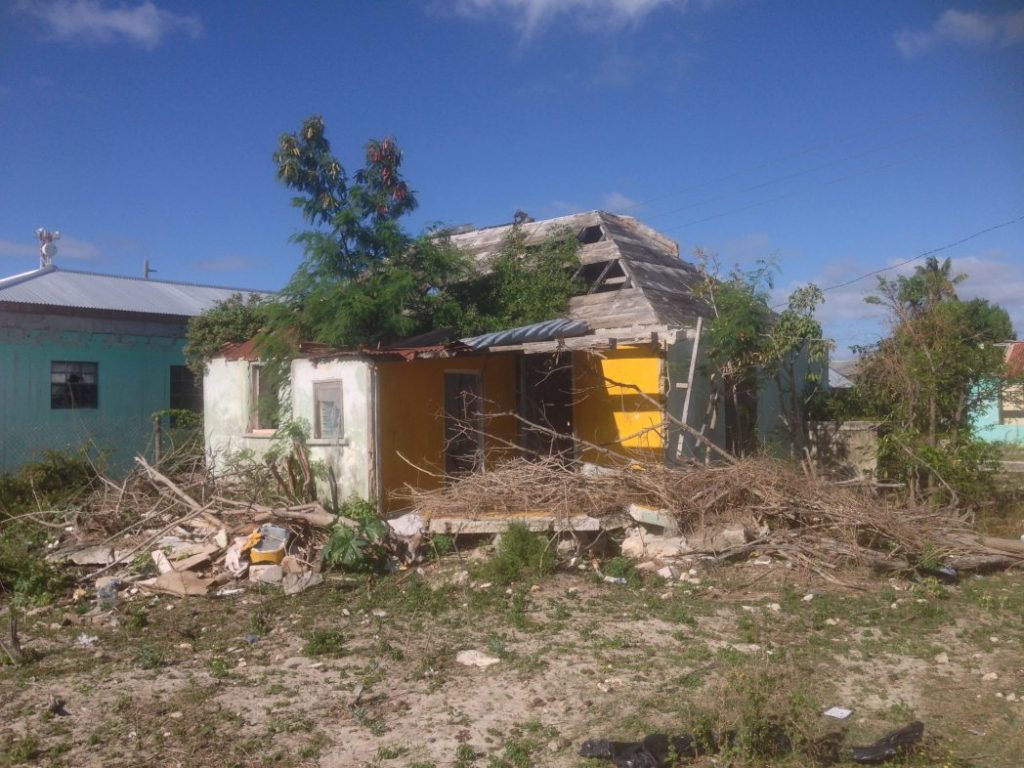 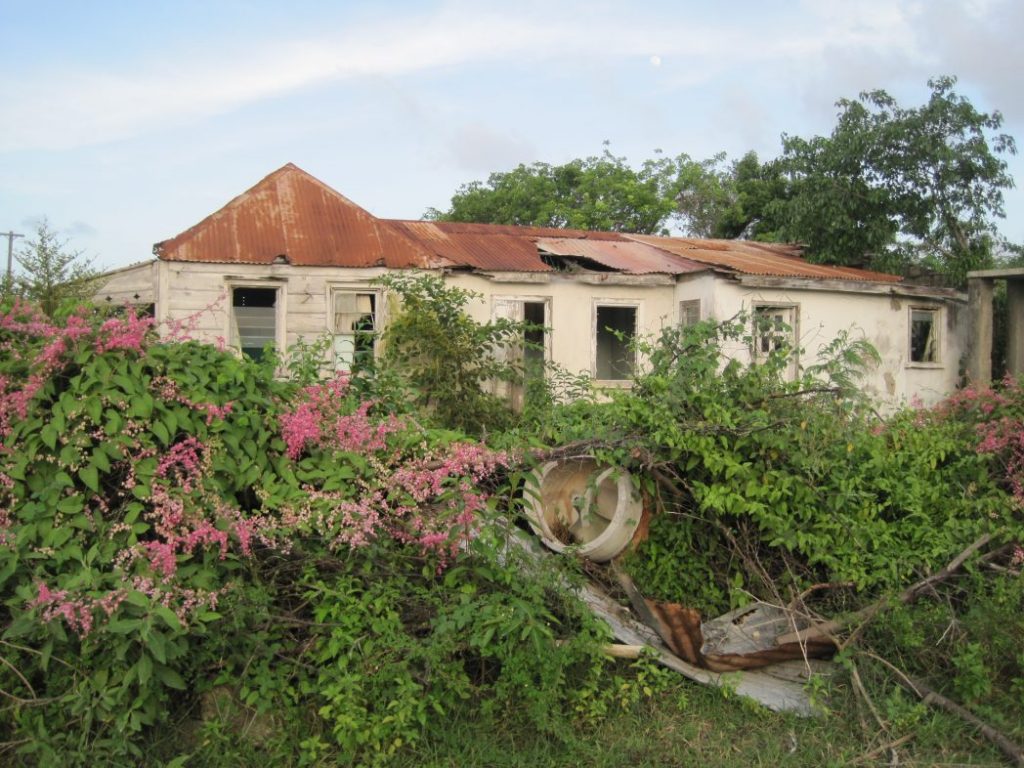 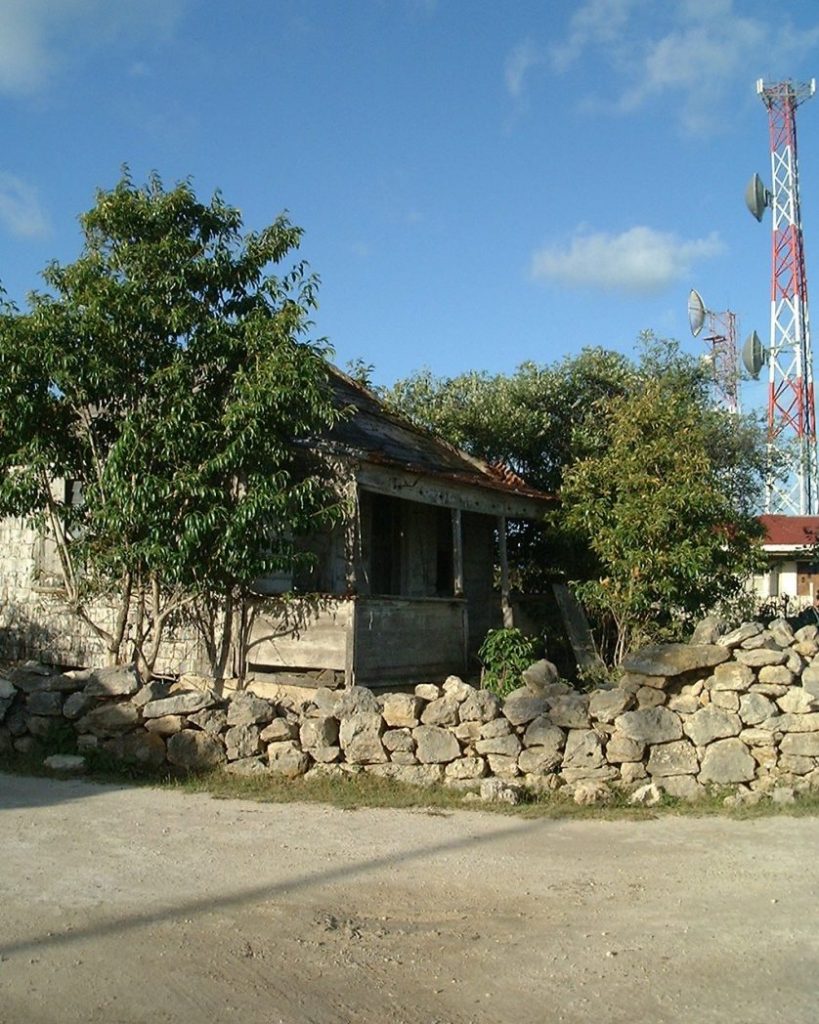