The culture and customs of the first peoples to live in the Caribbean in general and on Barbuda specifically have had a lasting influence on the culture of today. As technology improves, so we learn more about the past. On Barbuda some parts of the island remain as natural and wild as they would have been in ancient times, and some of our traditions such as communal land use, foods and remedies were established by these people. Throughout the island you can see the clear evidence of the settlement of Barbuda. There are many locally known sites and it’s quite easy to find fragments of pottery and conch shells that were used centuries ago. Only Barbudans had prior knowledge of a pre-European culture on the island until 1965 when a D R Harris published a picture of a large stone Dogs Head Ceremonial Inhaler. Harris indicated that this was the first significant artefact evidence of Amerindians living on Barbuda and the only artefact of its kind known south of Puerto Rico. The inhaler was found near Two Foot Bay and had been used as a door stop in a Barbudan home.

Between 1979 and 1992 Dr. David Watters from the Carnegie Museum published the most complete updates on the Amerindian presence in Barbuda and its history in general. Dr. Watters conducted surveys and test excavations. Dr Steven Hackenberger and local teacher Gregg Wilson from Central Washington University visited the island in 1999 with a group of students and added to the survey work of Dr Watters and started to inventory collected items for further study and storage. Since then regular archaeological work in Barbuda has been carried out by various visitors including the Antigua Historical Society and Professor Sophia Perdikaris of the Barbuda Research Centre (BRC).

Barbuda is of intense interest for studies relating to it’s history and for several years the City University of New York (CUNY) have visited Barbuda with Sophia Perdikaris (who has published a large number of fascinating articles online) on a regular basis – bringing students to carry out extensive archaeological field research – including excavations at Seaview, Highland House, River and the caves. BRC have set up their own base on Barbuda and some of the funding was used to establish a small – now closed – museum in the village – without a permanent place to view these finds we are losing our artefacts.

Note – permission is required from the Barbuda Council before any investigations on Barbuda of any kind take place. Any historical items of interest found must be presented to Council and not be removed from the island.

The first inhabitants of Barbuda were hunter gatherers who came to our shores by canoe, probably from Yucatan in Mexico, about 3000 to 4000 years ago. These people are called Ciboney, ‘the stone people’ from the Arawak language, or ‘pre-Ceramic’, as pottery is not associated with their sites. Artefacts from this time include cutting blades fashioned from the large gastropods that the Ciboney harvested, while celts, picks, hoes, and water vessels were made from conch, trumpet shells and whelks. The best evidence for their presence is along the southwest coast of Barbuda from Coco Point up to River and to the south-east corner of the Lagoon. This is the Strombus line, made of piles of Queen Conchs (Strombus gigas) that were harvested for their nutritious meat, and thousands of chert flakes from Flinty Bay, in Antigua. These hard sharp stones would have been used to cut meat for cooking or drying. Habitation sites are along the coast near Codrington, River, Sucking Hole, Factory, and Goat Pen. More recently human remains carbon-dated as 3100 years old were found at Boiling Rocks, near Spanish Point.

The Arawaks or sub-Tainos came from Venezuela and Guyana at about the time of Jesus Christ. The earliest human remains are at Seaview, near Two Foot Bay, and date from 1600 years ago. The Arawaks were excellent at horticulture, they cultivated sweet potatoes, corn, peanuts, cotton, tobacco, and numerous fruits, vegetables and medicinal plants. The bitter cassava plant provided the staple of the Arawak diet. They peeled, shredded, squeezed, and sifted the starchy tuber to remove the cyanide and then baked cassava as bread on griddles the size of pizza pans. Fish, turtles, manatees, and other seafood, birds and their eggs, iguanas, small mammals, and land crabs provided the protein in a very well balanced diet. The Arawaks are characterised by their sophisticated pottery, known as Saladoid. The decoration was white-on-red and had zoned-incised-crosshatching. Later the pottery became simpler when red and brown or orange predominated. This pottery has been found at Sufferers in the Spanish Point area, and may exist at Indian Town, near Two Foot Bay. The period 1500 to 800 years ago saw the heaviest Arawak population on Barbuda, which often was used only for short stays or seasonal provisioning. Six or more village sites are known including Sufferers, Indian Town, Highland Road, Guava and Welches. 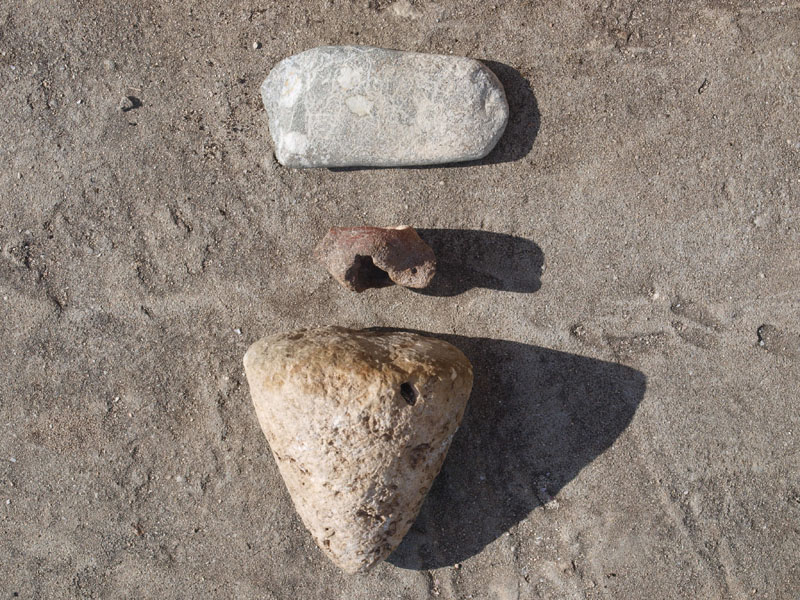 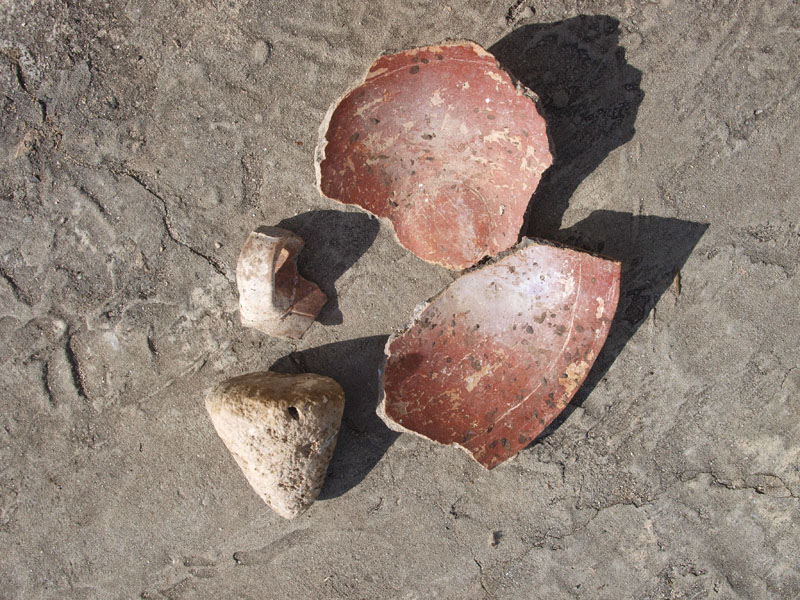 The Caribs also spent time on Barbuda; they had probably replaced the more peaceful Arawaks by the time of European contact. The Caribs did not live on the island year round, but came seasonally to harvest seafood and whatever crops and land animals they could find – they preferred the mountainous and well watered islands of St Kitts and Dominica. The Caribs were a deterrent to European colonisation and in the early 1700s the British Royal Navy had to protect the inhabitants of Codrington from Carib attacks.

other fossils and archaeological finds 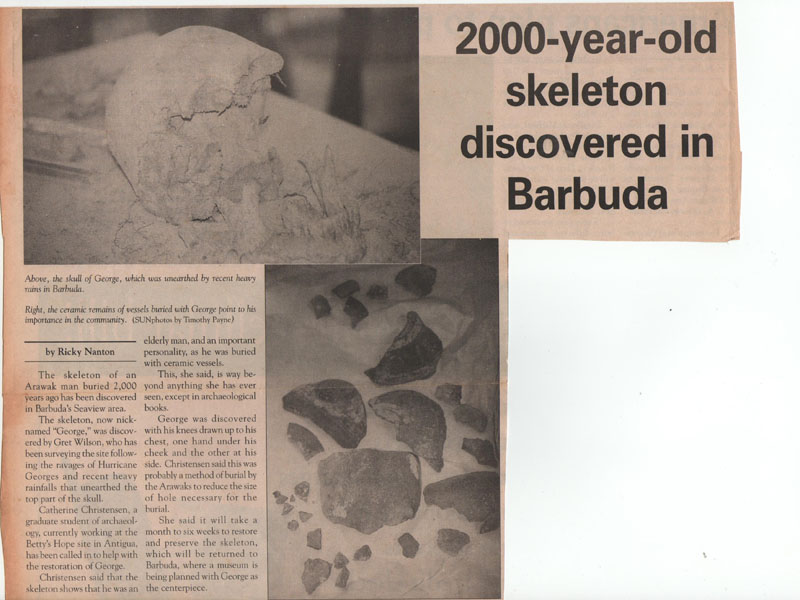 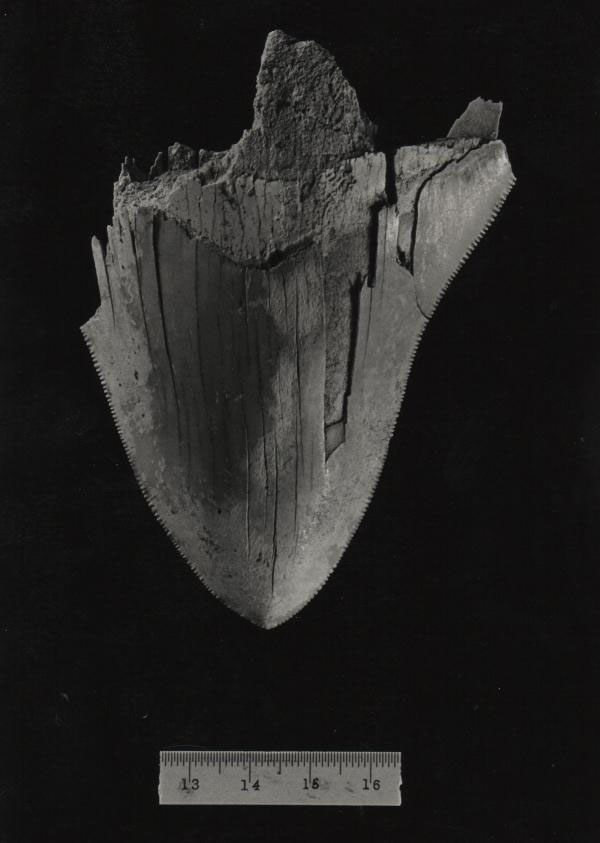 In the Seaview area, the skeleton of a 2,000 year old Arawak man was found with pottery grave goods. He was nicknamed ‘George’ after Hurricane Georges which exposed his grave. Above is the newspaper article from that time.