where to watch birds on Barbuda

Most of our birds can be seen at close quarters, and over a period of a few days you will see many different species. From pelicans on the beach to ground doves in the village, various types of gulls, herons and wading birds, small hawks and the occasional osprey. There are also hummingbirds, mockingbirds and grackles to be seen in every village garden. Go to www.birdforum.net for a comprehensive list with pictures of Caribbean-wide birds. In Antigua and Barbuda as a whole there are one hundred and eighty-one different species listed – you will see many of these easily on Barbuda.

The West Indian Whistling Duck is an endangered species found on the island in various ponds and mangroves, they can be heard calling at dusk as they fly low over the village. There are many coastal and salt pond birds here. The Tropic Bird with its long tail streamer is found in large numbers in the cliffs and caves of Two Foot Bay. There are many accounts on e bird of birding on Barbuda. Go to our tours page for contact numbers of local people who know where to go, they will be happy to take you out once you are here. 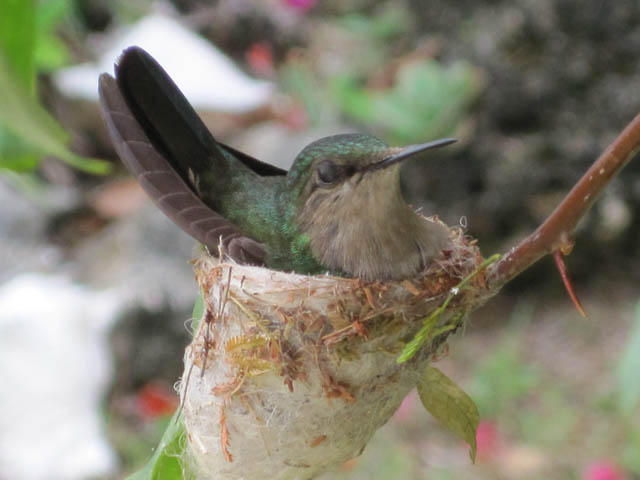 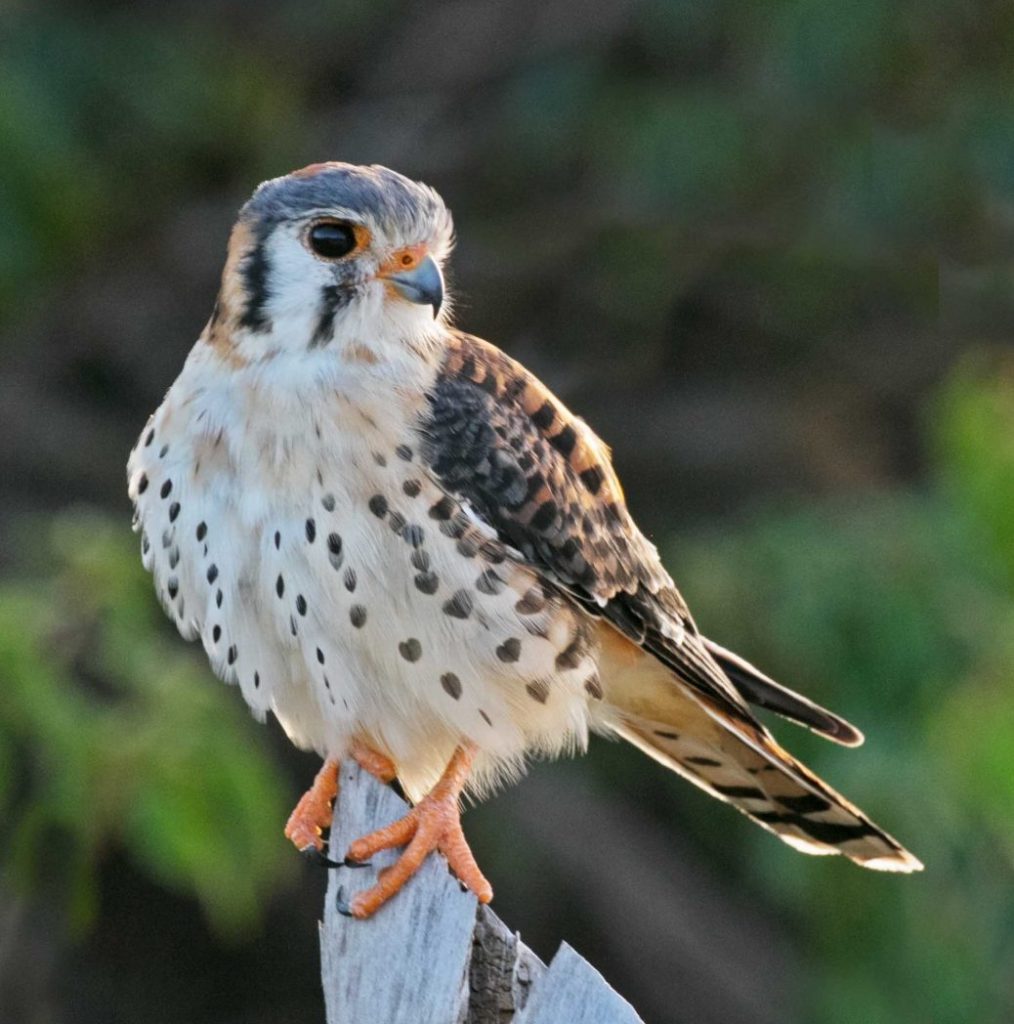 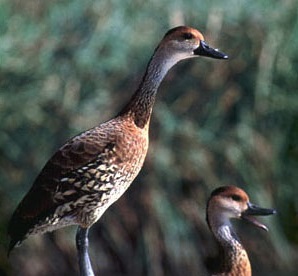 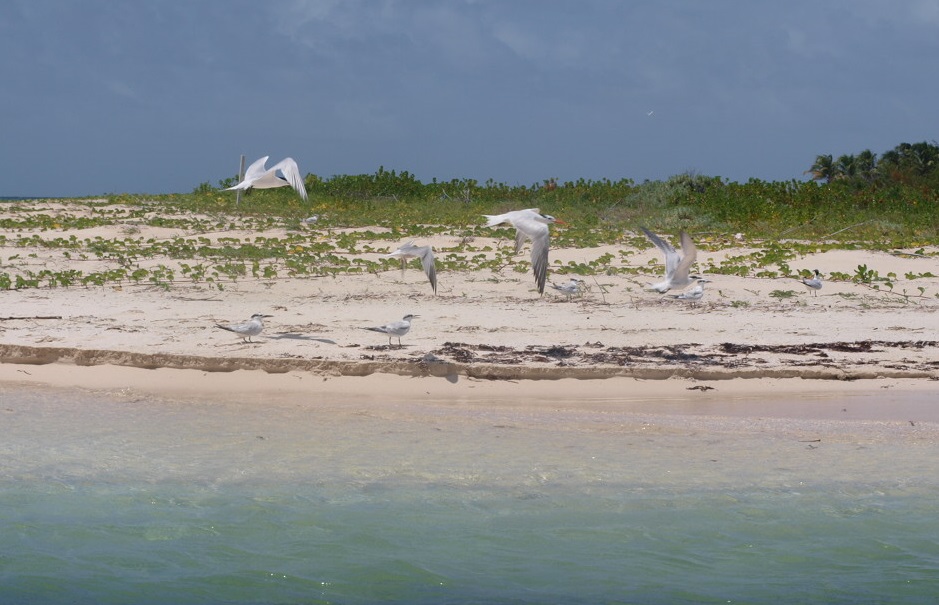 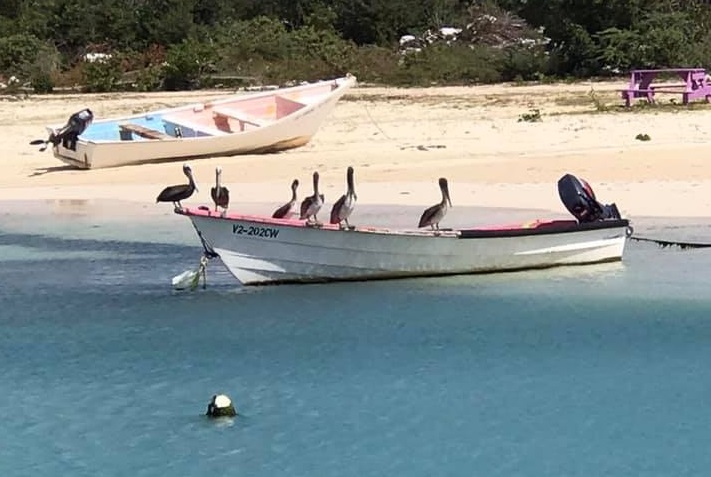 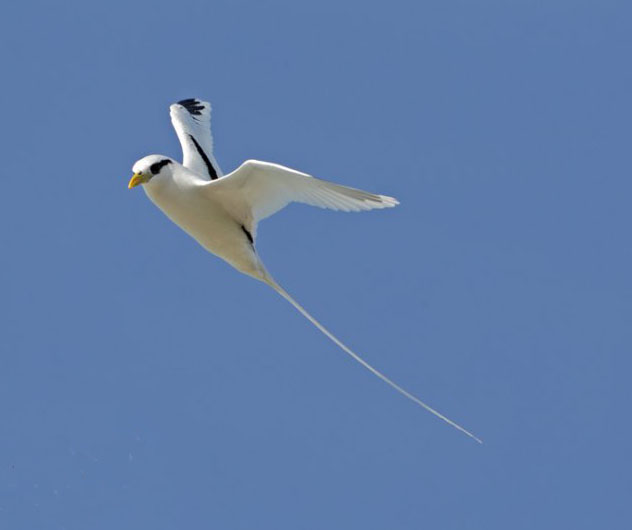 This bird is a rare endemic species on the island and was first described in 1905 by Mr. J.H. Riley. A genetic study was published in 1998 in “The Auk” by Irby Lovette and colleagues, which compared the DNA with warblers found in Barbuda, Puerto Rico and St. Lucia. The evidence confirmed that the three are separate species and in 2000 the American Ornithologists’ Union officially split them into three species. Although not endangered, a study has never been done to date on the Barbuda Warbler so numbers are unknown, but they are easily found hopping through the undergrowth out in the bush and in local gardens. 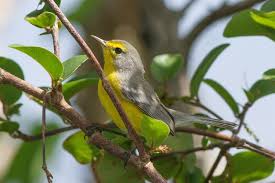 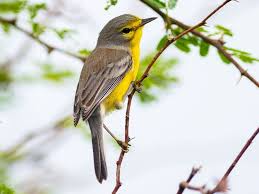 Barbuda is best known for our enormous nesting colony of Magnificent Frigate Birds Fregata magnificens, one of the most fascinating bird species anywhere in the world – an aerial pirate of supreme daring and a flyer of consummate skill.

Frigate Birds cannot walk or swim, having very short legs and small feet. They spend their time in the air or perched on a mangrove bush limb. With an eight-foot wingspread and only an average of three-pound body weight, the Frigates have a wingspan-to-weight ratio that allows them to soar effortlessly on ocean breezes for days at a time. 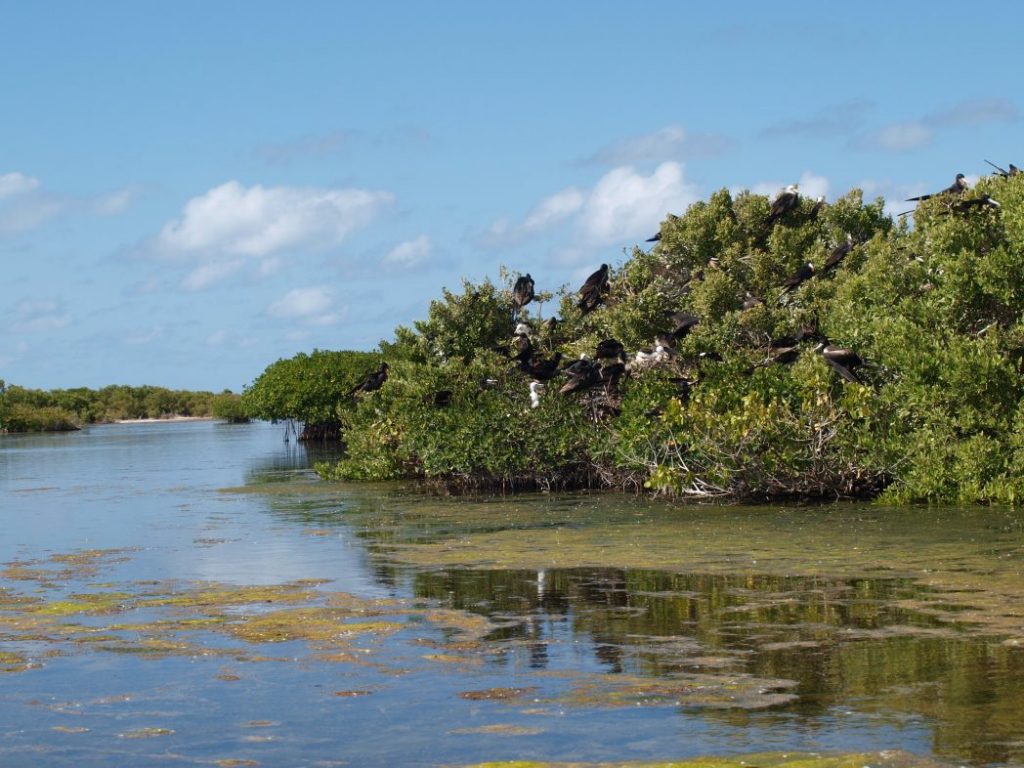 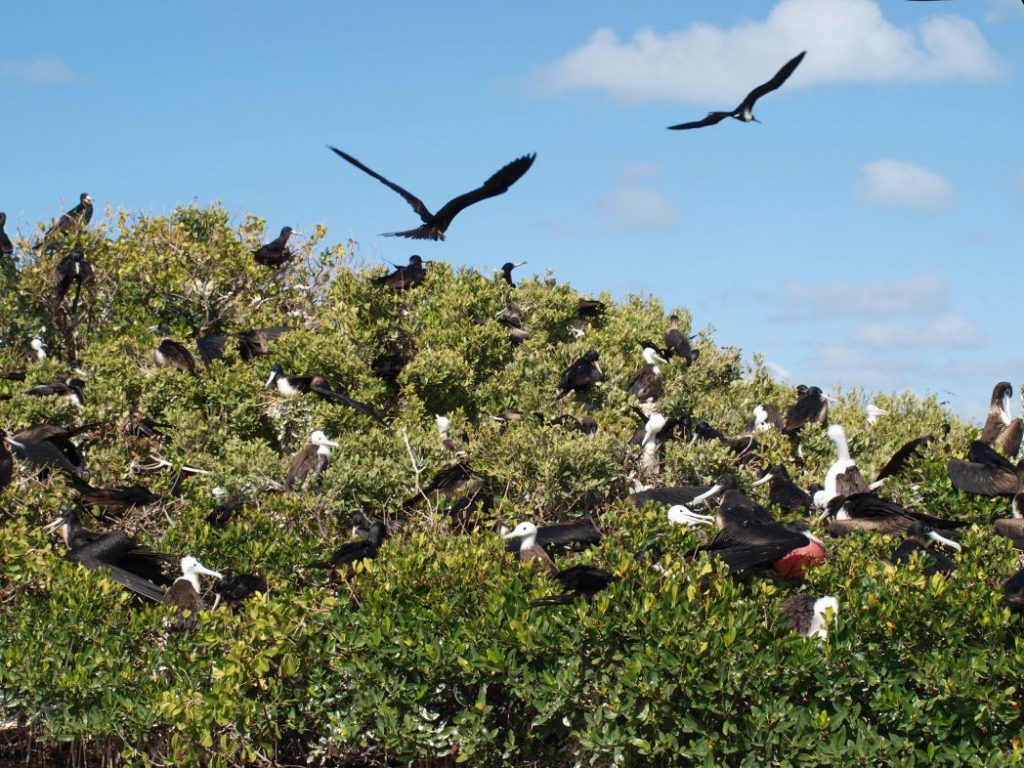 Barbudans call this bird the ‘Man O’ War’ for good reason. When hunting for food, two or more Frigate birds will gang up and cruise until they find a slower-flying bird that has just caught a fish. One Frigate peels off to chase the quarry, sometimes capsizing the victim in flight. When the terrorised bird drops its prize – or disgorges the partly digested morsel from its gullet – one of the other Frigates snares the second-hand titbit even before it hits the water. Second only to a Frigate Bird’s concern for food is its interest in the opposite sex. Barbuda’s amorous pirates start mating in September, when the males find new mates and set up home. Groups of posturing males inflate their huge scarlet neck pouches and sit on their chosen nest site until an unattached female passes by. Then the males all go into action, quivering their outstretched wings, waving their heads back and forth, and drumming their beaks to attract attention, a noise you will hear from your boat. The chicks are hatched onto a nest of twigs balanced precariously on the mangrove and they must learn to fly from there. Barbudan fishermen tell stories of lifting a bird up out of the water into the air to save it from drowning, but once they are up there is no stopping them.

Look up almost anywhere in Barbuda and you will see these beautiful and prehistoric-looking birds soaring above you. Note – this area is a protected conservation area of special interest and as such all visitors must comply with local regulations. It is forbidden by the Barbuda Council to use your own dinghy to enter this protected area on Barbuda. A small payment of $5 usd must be paid by ALL VISITORS, which is used for the upkeep. Please pay this before you go at the Fisheries building. You must only visit the sanctuary in a Barbudan boat, listed under tours. Anyone found breaching these regulations will be reported to the police, removed from the sanctuary and is likely to be prosecuted. The local cost of a visit in a Barbudan boat is currently US$50 per boat of four people, plus US$12 for each person above that number and the Council entry fee. 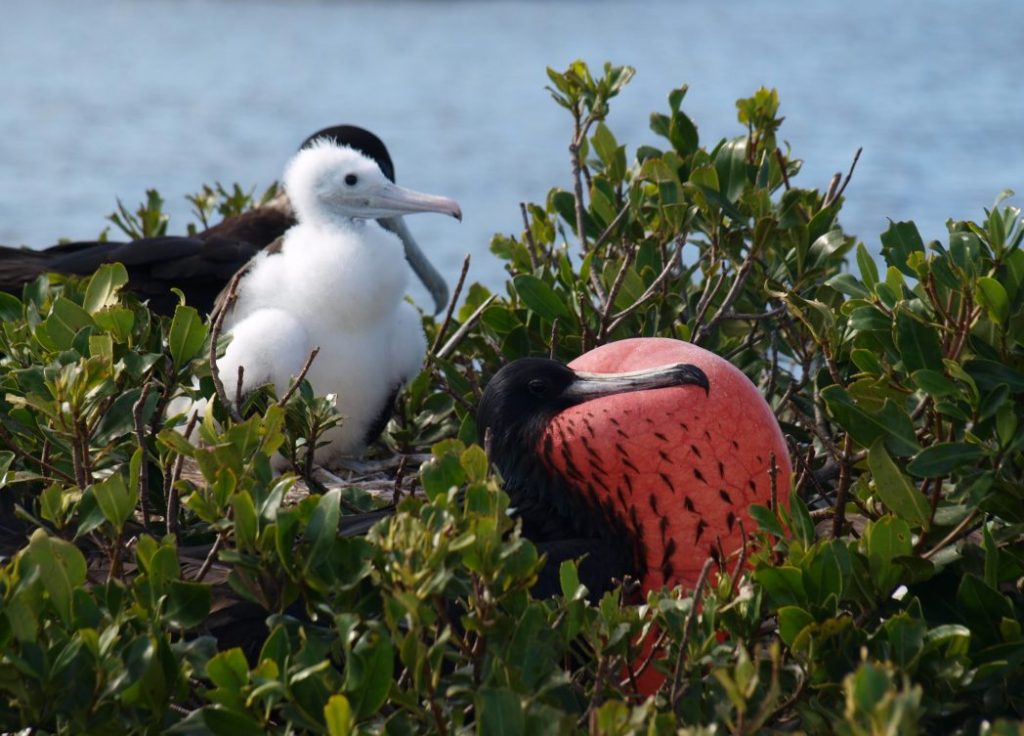 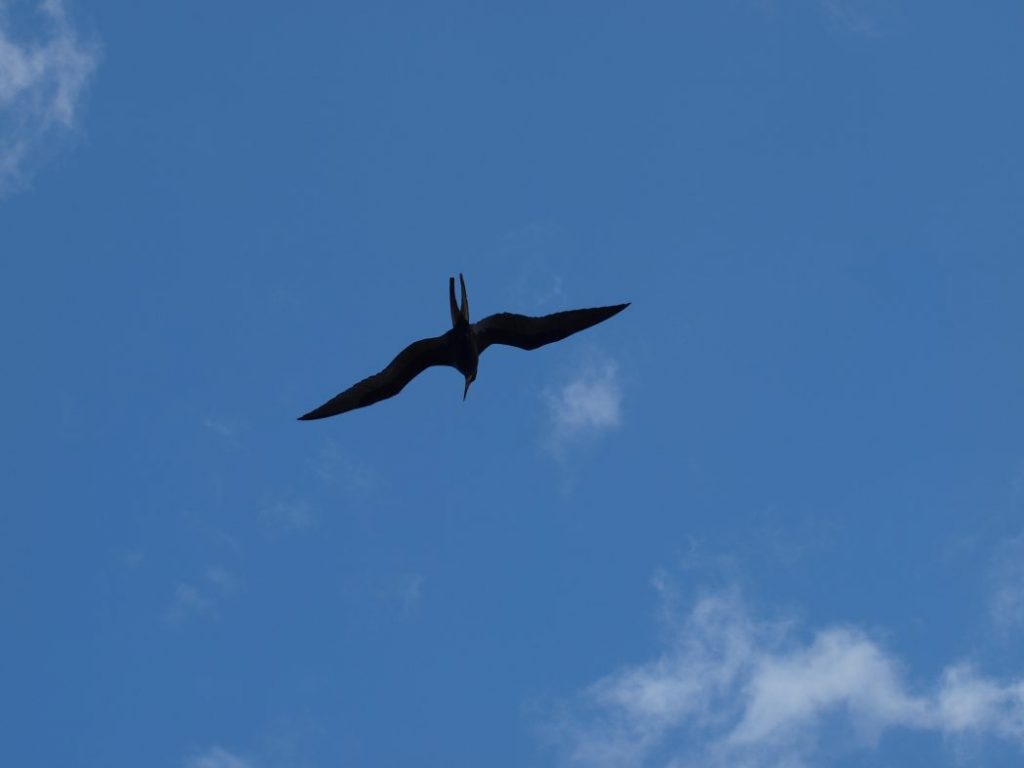 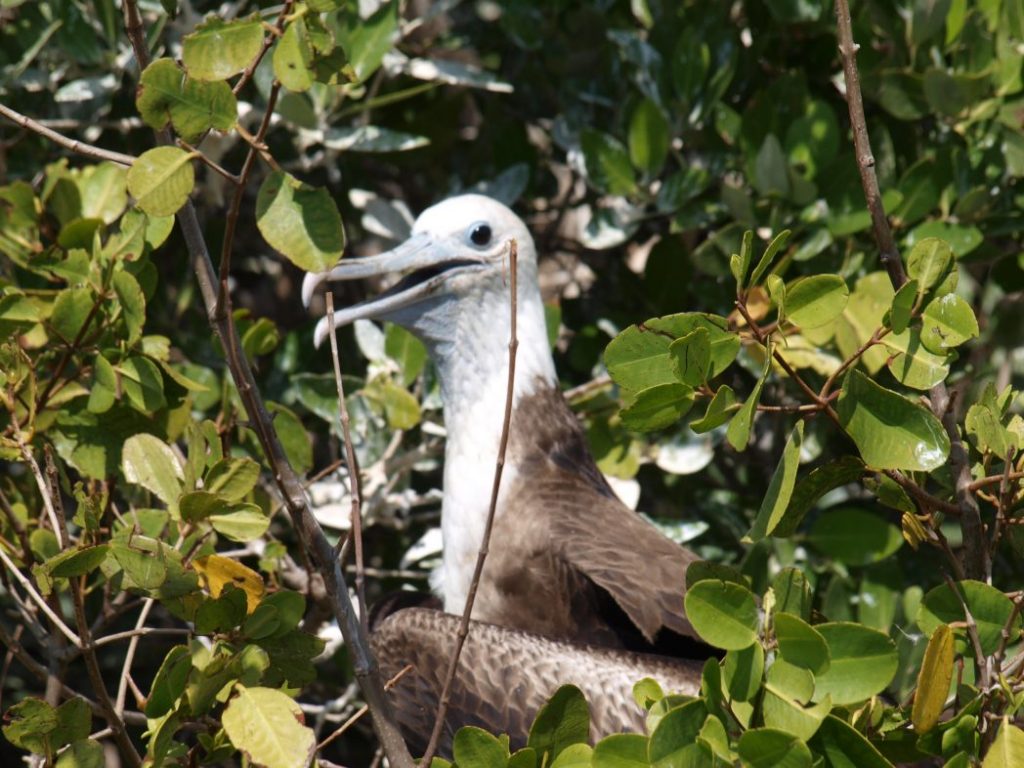 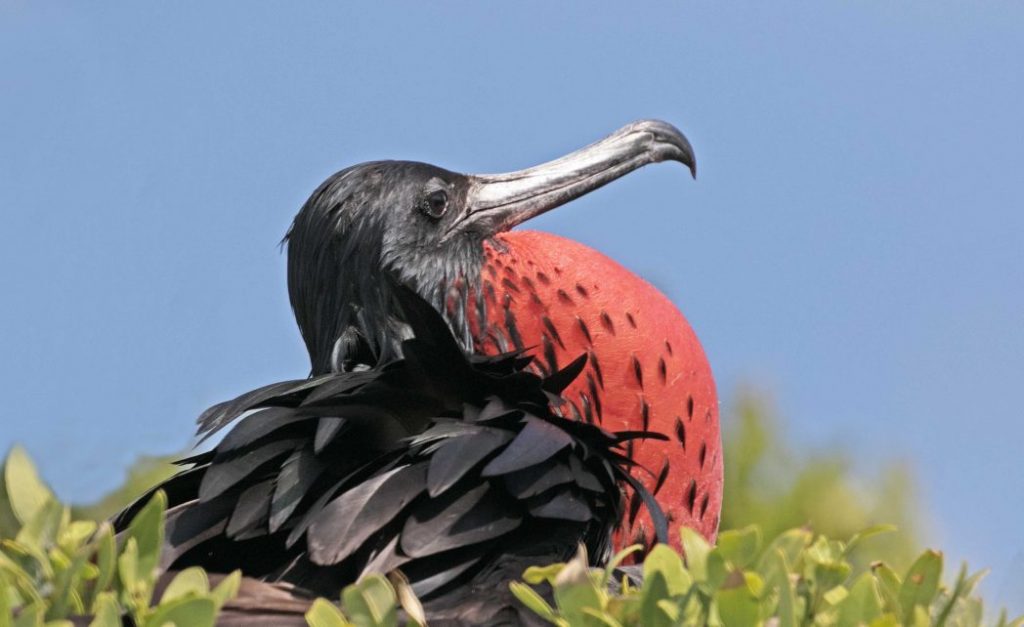